The day will start with a pick up from your location in Playa del Carmen or Tulum area at whatever time suits you best, usually between 8 and 10 o'clock.

The next stop will be picking up food, snacks and drinks. This will take place at a location where you can use an ATM or buy things which are not included.

One more stop at our trusted filling station in the Mayan jungle where we pick up the scuba tanks necessary for the diving. We give our clients the chance to see the place that fill the tanks and the air they later will be breathing.

Now its time for the first dive location. A short drive on a dirt road that leads towards the first dive site of the day. Upon arrival we will show our clients the place and its facilities, then a very thorough briefing in front of the map where everything such as safety and standard procedures will get explained before the dive.

After the first dive its time for lunch and some drinks so everybody stays hydrated.

When you are ready to leave we will change to the second dive site where another briefing will take place before the dive.

After the dives we bring you back to your destination.

The average duration is 6 hours.

The Yucatan Peninsula is a huge limestone platform where water runs through underground caves. Part of this land has collapsed, creating sinkholes called Cenotes, which gives access to this unique underground system.

More than 40 million years ago the entire Yucatan Peninsula was submerged by sea water, it was a thriving coral reef.

Ice ages have caused the ocean level to rise and fall, so at times the Yucatan was emerged and other times it was flooded. The caves were formed when ocean level was low. Rain water mixing with the carbon dioxide of the atmosphere created carbon acid. Because the Yucatan ground consists of very porous limestone, this carbon acid percolated into the ground, dissolved the limestone and over time carved out huge systems of underground tunnels and caves.

The dissolved limestone dripping into dry cave passages, over thousands of years formed an amazingly beautiful decoration of stalactites and stalagmites. It takes approximately 100 years for one inch of growth.

The cave system was flooded once again 8000 years ago after the last ice age. This can happen today and will continue to happen. The Mayans call these sinkholes “Dzonot”, sacred well, hence the Spanish word CENOTE. The Cenotes is the only source of fresh water in the jungle and is still considered an entrance to mythical and spiritual underworld. 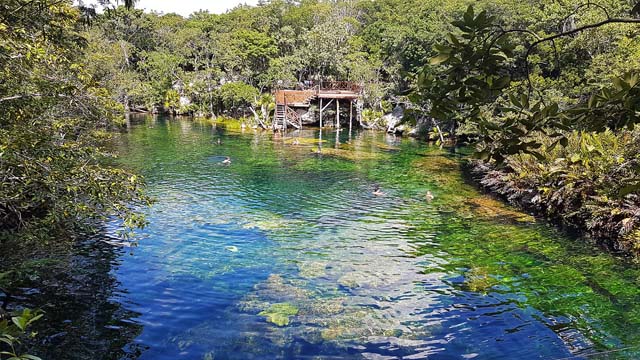 A large and very beautiful cenote. El Eden is perfect not just for cavern diving, but swimming, snorkeling, training and more. The cavern dive is beautiful with plenty of light all the time, a beautiful halocline and it is ideal for inexperienced cavern divers with not much of a change in depth and plenty of light. 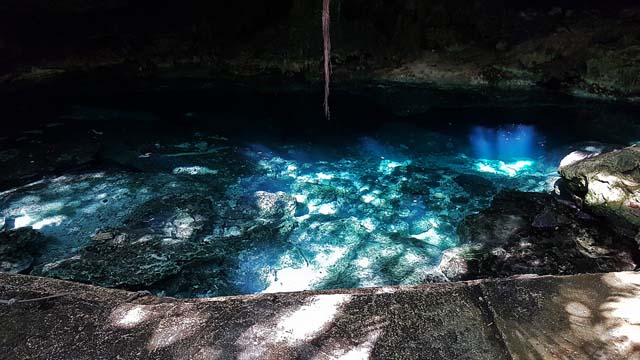 Tajma Ha has much to offer for both cavern and cave divers, its located 28km (17miles) south of Playa Del Carmen.

The cavern tour will take you from the entrance into a wide room underneath an air filled air dome. Here the light enter the room through holes in the sealing and penetrates the water like laser beams during the summer months. Continuing the dive you will enter cenote suger bowl where you year round on sunny days can see an amazing light show from the sun penetrating the water. Tajma Ha is decorated with stalactites and stalagmites and plenty of hidden fossils can be spotted if you look carefully. A beautiful halocline can be spotted at the deepest part of the dive where the fresh water meets the salt water.

Dos Ojos is located 50km (31miles) south of Playa Del Carmen. The name Dos Ojos means “two eyes” and originated from the two circular shaped cenotes which are located very close to one another.

Dos Ojos, known for its multiple shallow dives, gives the diver plenty of bottom time to enjoy the beautiful decorated system. Prepare yourself for two beautiful shallow dives with decorations and plenty of light. 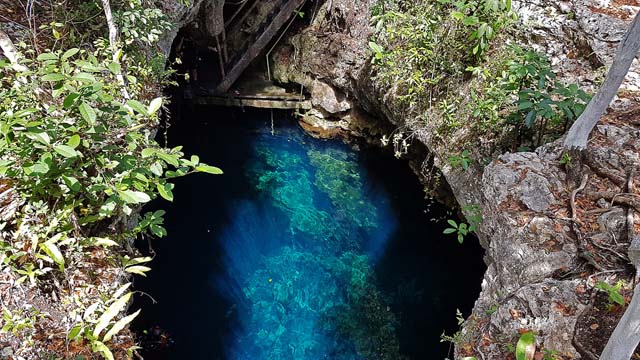 El Pit is a deep and rugged gash in the jungle floor just located 3km (2miles) past Dos Ojos.

The entrance is steep and narrow so be careful. Arrive early for a morning deep dive and best light penetration. Descend in the middle of the cenote through a shallow halocline towards the hydrogen sulfate cloud at 30m (100feet). Continue your dive above the cloud exploring the cavernous overhang of the cenote before coming up to the sloping ceiling at 10m (33feet). Remember to look up and watch the laser beams of sunlight penetration the gash from below. 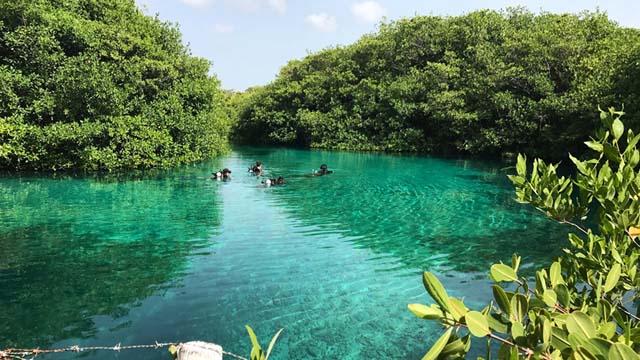 Casa Cenote, located 70km (43.5miles) south of Playa Del Carmen and 10km (6miles) north from Tulum, connects one of the longest underwater cave systems in the world with the ocean. It is one of the few surface rivers on the Yucatan Peninsula.

Casa Cenote gives the diver the feeling of being under the jungle and is perfect for cavern diving, regular diving, swimming and snorkeling. The beauty of the place is absolutely breathtaking above and below surface. The dive follows alongside the jungle and is shaped like a horseshoe. The diver or snorkeler will experience beautiful light penetration, halocline and a mix of fresh and saltwater fish species because of the location right next to the ocean. 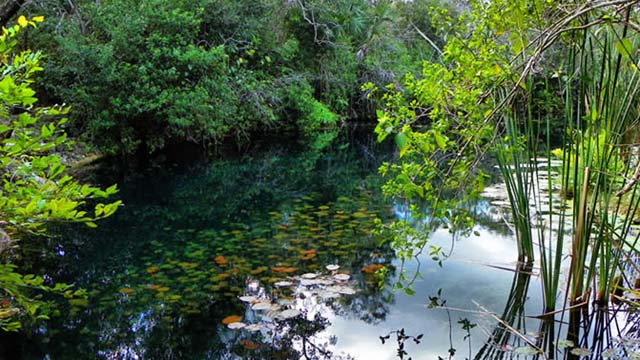 Aktun Ha better known as Car Wash is no longer used as a place to wash taxis. Car Wash is located 8km (5miles) outside of Tulum on the road to Coba.

With the water level just a few inches below ground level, divers and snorkelers find an easy entrance into the water. For cavern divers there are upstream and downstream dives possible. The upstream is the most popular one with large chestnut colored columns. You will enter the water through roots and fallen trees which like a fairy tail take you into a strange and different world with beautiful colors and flowers. The light falling through the roots create an amazing light show and the large room behind behind these roots is beautiful decorated. 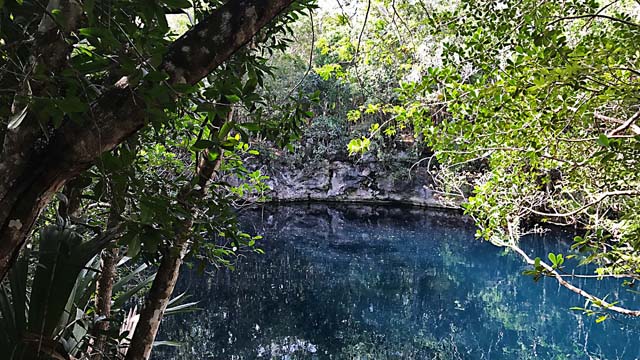 Angelita (English: "little angle”) is not only an atypical cenote dive, but a once in a lifetime dive in all aspects. Located 18km (11miles) south of Tulum, it is the furthest site visited from Playa Del Carmen.

After a 5min walk through the jungle you will reach the circular shaped cenote that goes all the way down to almost 60m (197feet). A little bit as in El Pit you will find a hydrogen sulfate layer at 30m (98 feet) depth. Underneath the milky cloud you will now no longer be in fresh water but salt water. Its very dark here and gives the diver the feeling of being in a forest at night with the big fallen trees that now rest at the top of the mountain like bottom. 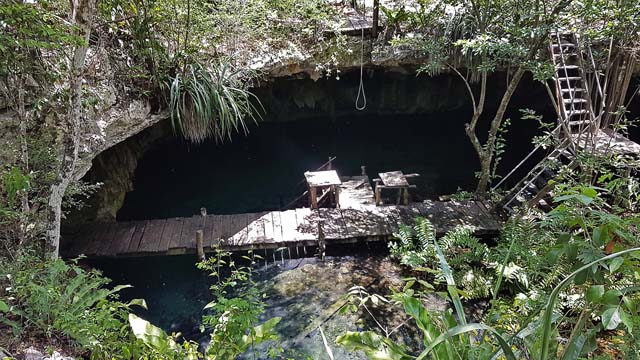 There are two independent circuits for diving in this cavern: The upstream line and the down stream line. The upstream line is the nicest decorated one, at the furthest away point of it there is an air pocket with a fully decorated ceiling where we come in to the surface.

When heading back to the entry the view of the light getting in to the cenote and the stalactites making contrast with the light is just breathe taking.

The downstream line is quite different, it’s also fully decorated and it connects with an other cenote in the way there are a lot of roots from the jungle getting in to fresh water, and at the furthest away point of the circuit you can see the light from the other cenote coming in. 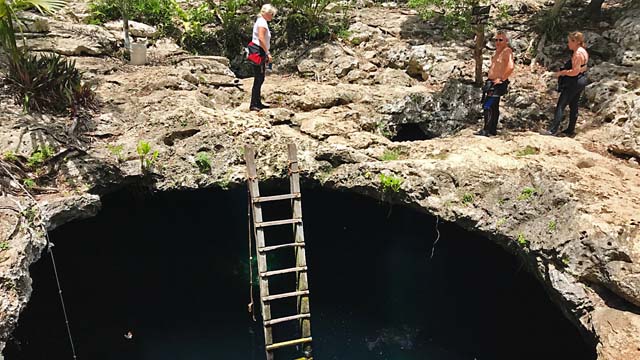 Cenote Calavera, which also means “Skull Cave” is also known as “Temple of Doom”. It is located just outside of Tulum, on the road to Coba. Completely different from any other cavern in the area, the entrance passes through a round hole on the surface rock. The adventure starts almost imminently as you have to jump about 3m (10feet) to the waters surface.

The cavern area is a huge room with a hill of sediments and rocks in the center. During the dive, divers wind their way slowly around the hill, traveling at different depths alongside the walls of the cenote. During the dive it is possible to move through three different halocline layers. There’s a lot of light in the cavern and a lot of fossils to discover. Look up towards the entrance and with a bit of imagination you might recognize the “skull”. Light passing through holes of the ceiling, creates an effect of two eyes and a mouth.