To make your experience a lifelong memory we provide an individual client service. We will adapt to your schedule, pace and special needs. Unless requested otherwise we take a maximum group size of four clients. With our experience of teaching scuba diving and guiding in ocean and cenotes you will receive a high quality standard and have an amazing time! 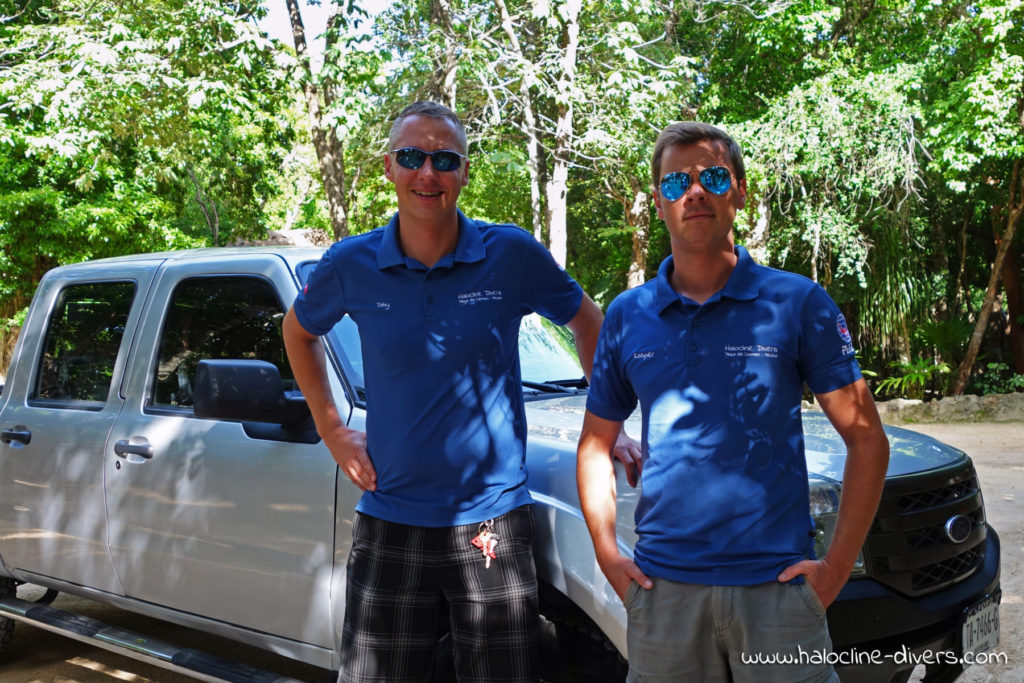 How Toby and Kasper met

Toby and Kasper met in Playa del Carmen in April 2016 and quickly discovered a very important thing about each other, they were both scuba instructors, shared a passion for diving and both loved the magical Cenotes. Toby and Kasper were both working for dive companies in Playa del Carmen at that time, but managed to go cave diving together despite their different schedules. The two friends came up with the name Halocline Divers.

Why the name Halocline Divers?

A halocline is one of the most beautiful natural phenomenon you can experience while cavern or cave diving. It is the layer between the fresh and the salt water that appears in most of the cave systems here, depending on the depth.

Salt water weighs more and is more dense than fresh water and will always stay below the fresh water. When a diver enters into the halocline it creates a surreal blurred visual effect. To non-divers it is similar to a mirage, the hot air shimmering above a hot tarmac road. Toby and Kasper, specialize in cenote cavern diving and thought this would be a perfect fit for their company. 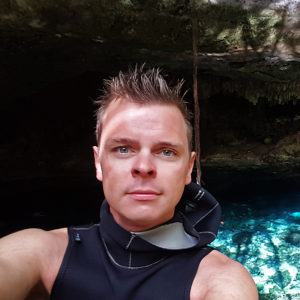 PADI MSDT#322909
Full Cave Diver#704211
Logged Dives1700+
Full Cave Dives100+
Cavern Guiding400+
Kasper was born and raised in the city of Aalborg in Denmark. From an early age on he was in or around water for all his life. When he was five years old, he became a member of the local swim club and learned how to swim. After a few years of swimming just for fun he took it up a notch and started swimming as a competitive sport. He spend most of his spare time besides school for his training. With his dedication he managed to become a member of the Danish National Team for two years with age 14. Following his Graduation from school in 2001 he started a career as an Automobile Mechanic at Mercedes Benz in 2002. After his apprenticeship in 2006 he was accepted as an employee and continued to work for the company for the years to follow. During this time Kasper always went snorkeling on his vacation travels to enjoy the marine life and what ever else there was to discover beneath the surface close to shore. While being on vacation on Koh Tao, Thailand in 2010 he finally got certified as an Open Water Diver. From this point on he was “hooked” and he felt the urge to return to the island every six months to take advanced scuba classes. In 2013 he took a sabbatical for eight months and moved to Koh Tao for this time to become a Divemaster. It was also in this period when Kasper developed his passion for wreck diving, especially in overhead environments. Inspired by his new dedication he took a Recreational Sidemount Course, followed by TEC 40, TEC 45 and TEC 50 certifications. In September 2013 Kasper returned to Denmark and his old job but realized very soon that he missed diving too much. It was time for a general, bigger change… He quit his job, put his apartment on the market and sold his car to move to Utila Bay Islands, Honduras to become a Scuba Diving Instructor. He continued his training and earned his Certification as a Master Scuba Diver Trainer (MSDT) in September 2015. After that Kasper started to work as an Instructor at a local dive shop on Utila. He enjoyed working there very much and gained a lot of experience teaching and diving. Remembering and evening with a good friend on Koh Tao more than two years ago, where the idea of enrolling in a Full Cave Course came up while watching cave diving videos on YouTube, it was finally the right time to make it happen… Still inspired by the amazing videos taken in the Cenotes of the Riviera Maya, Mexico seemed to be the ideal place. The friends investigated further and agreed to take the cave course together with Cave Diving Training – Mexico in March 2016. Kasper left Utila with the intention of just staying in Mexico for a vacation and returning to the island. Half way through the course he realized that he had fallen in love with the magical Mayan Cenotes and had to stay. He eventually quit his job and stayed in Mexico ever since and enjoys diving at those enchanting places almost every day. Kasper started to work at a resort in Puerto Morelos, mostly conducting cavern tours. During this time Kasper met Toby, a fellow dive instructor with similar interests, like cave diving for example. In the second quarter of 2017 the idea came up to start their own business. Both quit their jobs and put all the effort in the new project. To be continued… 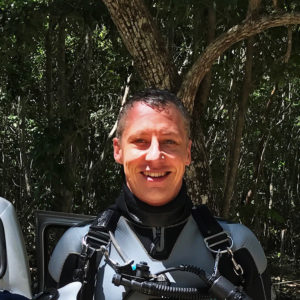 From a very young age on water has always been Toby’s element. He loved swimming pools and learned swimming and skin diving when he was a little kid.

Toby became interested in scuba diving when his dad first got certified in 1984 and shared all his knowledge and experiences. Back then the equipment was not that widely available for rent and divers usually had their own equipment, which was at least partially adventurous – but this is a different story.

One day his father set up his yellow double eight liter steel back mount set at home. He brought it into the bathroom, where 6 year old Toby and his brother were sitting in the bathtub and taught them how to breathe from a regulator underwater. This was an easy task like for most kids in this age, who like the wet element. It ended up with buddy breathing (alternate breathing from one regulator with two persons while submerged) because both wanted to use the one regulator simultaneously. As the divers amongst you probably know or even remember, the alternate air source became a standard much later. Back in the day the minimum age to get scuba certified in Germany was higher than today. So there had to be some waiting time until both siblings got certified in 1991.

Toby became a member of the German Rescue Swimming Organization (DLRG) in 1996. Besides his own training he was working as a swimming instructor to teach kids how to swim as well as teaching rescue swimming for teenagers and adults.

Instead of going to the military (the draft was still in place) he chose to work part time for the DLRG over the next seven years instead. There he obtained his rescue boat license and gained deeper knowledge in first aid, ice rescue and much more.

During that time Toby moved to Darmstadt to go to university. After he finished his studies in computer science and business he became an international business consultant. But with the years it became more obvious that he had to pursue his true passion, not only on vacations, but full time. The decision was not easy but in February 2013 he moved to Makadi Bay, Egypt permanently to begin his professional diving career.

Toby went through a very intensive training and got certified up to the level of an Open Water Instructor in September. Due to the tourist crisis in Egypt he moved to Mirbat, Oman where he worked for the same company for seven months before returning to Egypt.

In December 2015 it was time for something new, so he quit his job in Egypt and went on a vacation to Mexico with his former base leaders and good friends. From the beginning the idea was to not have a return ticked and see if he would like to stay.

As they have been in Mexico one year before, they already knew the Cenotes. After seeing the footage from their vacation it did not take a lot of convincing to enroll in a Full Cave course with one of them. At the end of February 2016 Toby received his Full Cave certification.

When they returned to their base in Egypt, Toby was looking for a job and soon started working in a resort for a larger company in Playa del Carmen and later changed to the Excursion Team guiding dives in the Cenotes and on Cozumel.

During this time Toby met Kasper, a fellow dive instructor with similar interests, like cave diving for example. In the second quarter of 2017 the idea came up to start their own business. Both quit their jobs and put all the effort in the new project. To be continued…